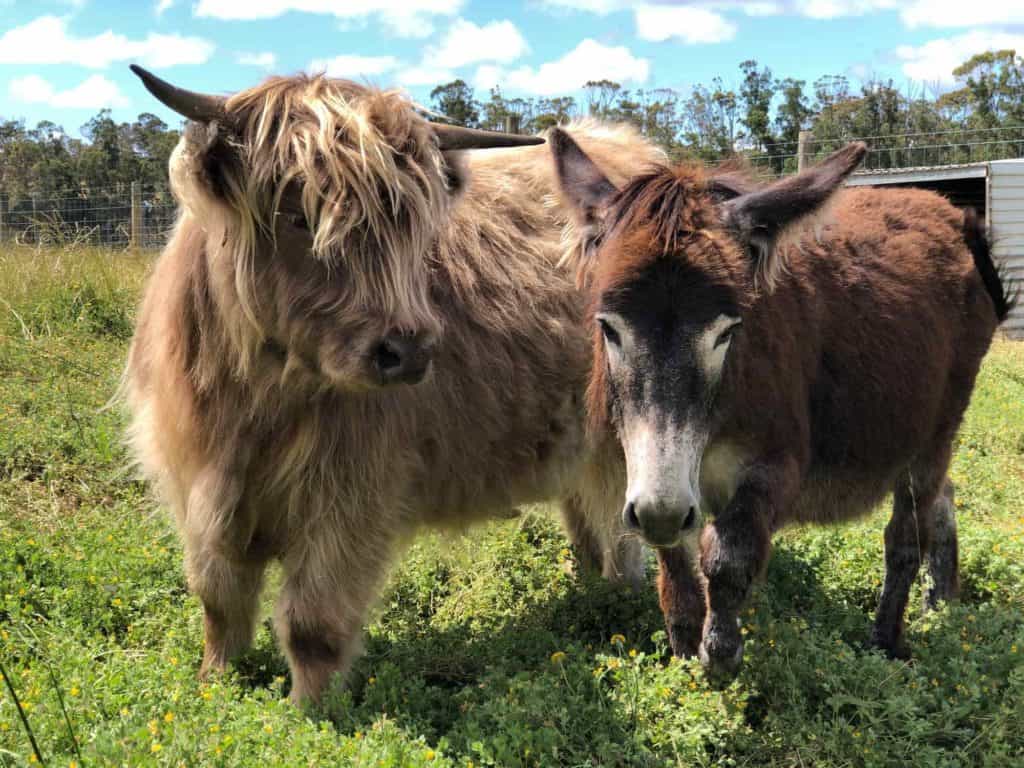 Who has beautiful locks of long tousled hair, weighs nearly half a tonne and eats strawberries like there’s no tomorrow…? BORIS…Our loveable Highland Coo! At two years of age, this gentle giant is a big part of the family here at Handasyde’s Strawberry Farm, along with his best mate Beanie – our benignly bossy hee-hawing little Donkey.

Boris was just a wee calf when we bought him from Denmark Alpaca Farm, and he was still drinking milk from a bottle. If you think he’s cute and cuddly now, you should have seen him when he was a baby! We never intended to buy a donkey too…but by the time Boris was old enough to come home with us, he’d made a firm friendship with his paddock-mate Beanie, and the two of them were inseparable. We didn’t have the heart to take one and not the other. And so began the ballad of Boris and Beanie..!

These two have been the source of joy and inspiration for people of all ages here at Handasyde’s Strawberry Farm. Our lad Beanie the donkey is a little darling and has given us so many laughs. We named him Beanie after his funny tuft of hair. Go and see him yourself…he looks as though he’s wearing a beanie with a pompom on top..! Beanie is the eldest of the pair by six months or so…and of course he thinks he is the boss! He’ll often clown around and chase Boris, beckoning him to spar and play. But even though Beanie the donkey is strong and can be stubborn, this pint-sized punk is no match for the mighty horns of Boris. With only a gentle flick of his hefty horned head, Boris can send Beanie scarpering away to the other side of the paddock. 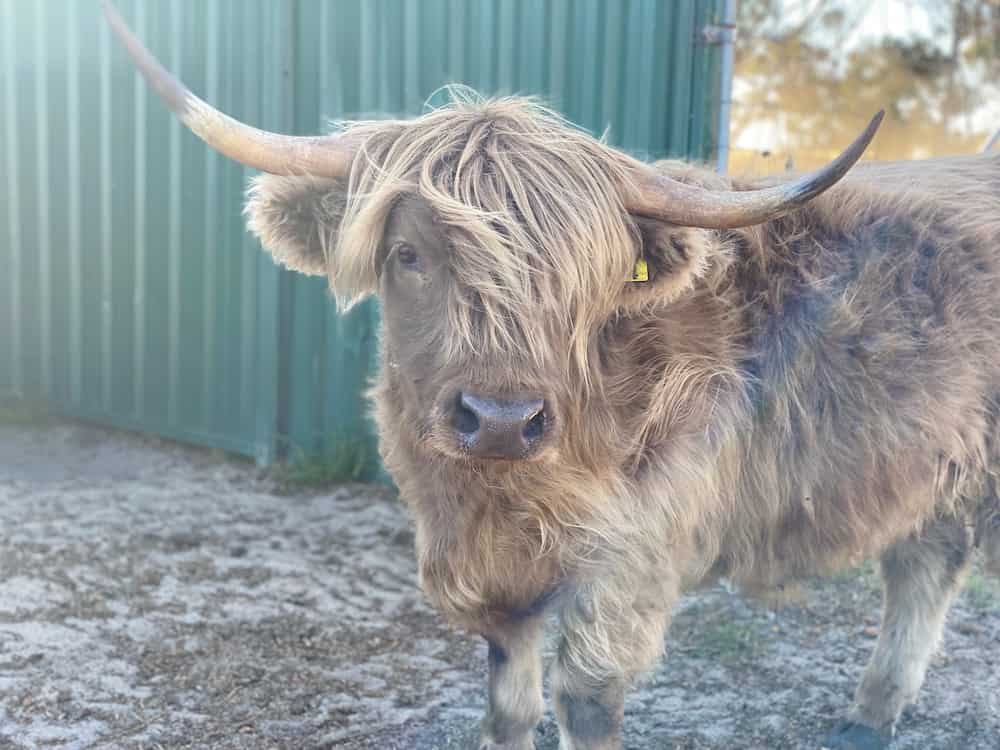 Boris’ horns will continue growing through all of his years, whilst the rest of him will soon stop growing as he reaches maturity. There are a few fascinating nuggets of knowledge to learn about highland cattle. Did you know that all highland cattle grow horns? Males (bulls) typically have heavy forward pointing horns, and the females (cows) are known to
carry more conditioned and upswept horns. The horns of these cuddly cows might look intimidating, but far from being used as any kind of weapon, highland cattle traditionally use their horns to forage through snow and rugged terrain, knocking down heath while grazing. Collectively, a group of highland cattle is known as a ‘fold’, rather than a ‘herd’. They are a very resilient breed, with long lashes and hair that keeps nipping midgies, mosquitos and beasties away from their skin. Individuals can live long into their twenties..!

Highland cattle are an ancient breed of cattle originating in the Highlands and Hebridean Islands of Scotland. The Highland was the first ever cattle breed to be registered, way back in the 1880s. They are highly prized and boast many fine qualities as livestock.

These qualities include excellent meat, strong bodies to clear land with, fine hair to spin into fibre and milk that’s got an extra high fat content (but not our Boris, he’s a bloke..)!

These days it’s common to see highland cattle grazing as pets. These intelligent beings are well known to enjoy the company of other animals. They are a curious breed and quite happy to share their food with others, although there’s not much that can come between Boris and a bucket of strawberries..!

Boris and his breed are easy company and very docile – they don’t stress easily. Whilst Highland Cattle are social creatures, they won’t lament being alone for long. Beanie on the other hand…this guy needs friendship! He really does love his best mate Boris.

Not all Donkeys are Asses 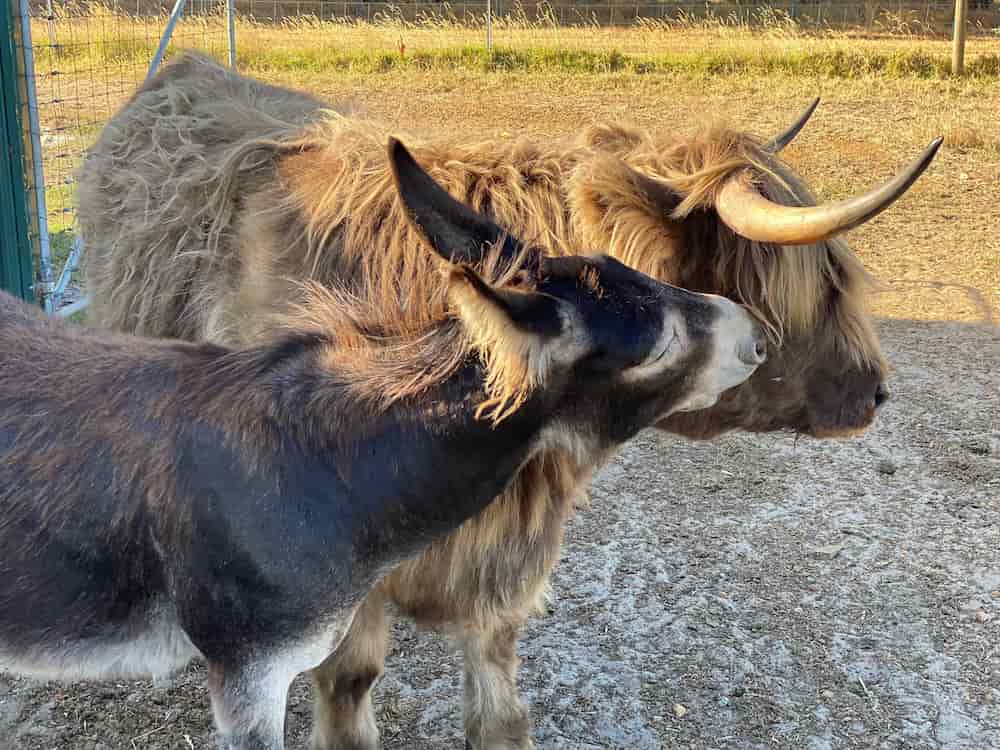 Donkeys often buddy-up for life. They can become incredibly lonely, sulky and sad if left alone, as we’ve witnessed here at Handasyde’s Strawberry Farm..! There was one occasion we’ll always remember..! Boris thought the grass was greener on the other side…and so after craning his neck and inching forward, somehow Boris eventually found himself on the other side of the fence munching grass that was in fact just the same as the grass in his original paddock. This young gent surprised himself by reaching the other side, but he was otherwise unfazed. Boris stayed exactly where he was and munched away without wandering off anywhere. We soon led him over to another paddock that he couldn’t escape from. As we walked him away, our ears just about fell off with the impact of an eruption of noise from paddock mate Beanie…! At the sight of Boris departing, Beanie the Donkey let out a gigantic heeee-hawww!! Beanie cried and threw himself on the floor like a toddler. All four legs were up in the air and his head waved around as he carried on wailing and hee-hawing. Poor Beanie thought he was being left behind alone forever!

Donkeys have been known to get a bad rap for being grumpy or misbehaving. But in fact, they can be loyal, loveable and very gentle beings. Anyone who has had the good fortune of getting to know a donkey knows there’s a reason behind all of their actions. It’s not at all uncommon for Donkeys to try to take the lead in everyday tasks and happenings – they like things just so! These intelligent creatures know their own mind and don’t like being told what to do, but that’s ok – being headstrong is one of the ways that Beanie shows connection and stewardship to his friends.

We love these two beautiful beasts equally and it’s wonderful to see the ways in which our customers interact with them. There are many more adventures ahead for these two young gentlemen..! You can visit Boris and Beanie any day of the week. They live in the paddock near our Cafe – follow the signs at Handasyde’s Strawberry Farm or ask our lovely staff about Boris and Beanie’s whereabouts.

← Sweet Memories - Summer Fun, Picking Your Favourites! Ingredients to Success →
Book a table at our cafe